Grit, Determination - and a Flair for Winning

You can get an idea of the type of person Brandon Rinta is by simply looking at his office. It is decorated in a sleek, modern style, with a flat-screen TV on one wall, and comfortable desks with newer computers neatly aligned in the corners of the room. 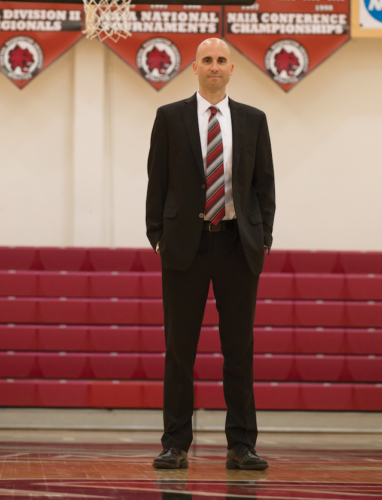 But under the tidy surface, the office is the nerve center for an operation filled with late nights and early mornings of recruiting and game planning.

The same might also be said of the coach, as he sits down to talk at the conference table stationed in the middle of the room. He seems relaxed, but it's an illusion. The intensity and determination that fueled his journey to CWU as a player and later as a head coach can be seen in the way he maintains eye contact and in his thorough answers to even the simplest queries.

"Going through hard times - that's where growth happens," Rinta explained. "I know that i can look back on some of the hardest times I've been through, that's where the most growth has come."

"I had a decision to make. I either ended my career or I switch hands and try to do the best I can," he said. "It wasn't an easy decision but i wasn't going to give up on the game of basketball and so I gave it my best shot and spent as much time as possible developing my off hand."

Prior to arriving at Central, Rinta played basketball at Yakima Valley College, where he was co-coached by Leon Rice (now head coach at Boise State) and the legendary Dean Nicholson, who coached at CWU for more than 26 years, winning 609 games.

While at YVC, Rinta earned first-team all-NWAACC honors while averaging 13.3 points and 7.2 rebounds per game during his sophomore year.

Rinta redshirted his first season at Central, which allowed him to continue to work on developing his left-hand game.

After graduating from Central with a degree in health fitness education, Rinta decided to go into coaching - and he's never looked back. He became a graduate assistant and later a full-time assistant coach at Eastern Washington University, then worked for five years as associate head coach under Tim Hills at Northwest Nazarene university. In 2011, he was named head coach at Lewis-Clark State College, where he posted a 164-62 record. His teams won multiple conference titles and reached the NAIA national tournament five times.

"We feel we landed on a coach that's going to really make a big difference in our program and have a positive impact on our department as well," he said. "That's his style, 'Let's go, go, go.'"

“"It's exciting to me to be able to be back at Central and be a part of this program again.”
—Coach Brandon Rinta

And now Rinta is right back where he started and where he wants to be.

"To be a part of that tradition, that legacy, it's something that I take pride in," Rinta said. "It's exciting to me to be able to be back at Central and be a part of this program again. Just like when i was a player, I felt it was a responsibility of mine to help continue that legacy. I feel that as a coach, too, and that would be one of my main goals."

Now that he is back at CWU, Rinta said he wants to utilize the same experiences and lessons that he has learned from his various mentors to help craft his vision for the men's basketball program.

"I never would have guessed how much of an impact choosing to go to YVC and playing for Coach Rice and Coach Nicholson would have had on my life," he continued. "His [Nicholson's] coaching tree is vast in the state of Washington and in the Pacific Northwest and the people that he mentored also mentored me."

Rinta looks to his time at Lewis-Clark, where he was able to build a successful, winning program, as a blueprint for what he hopes to achieve at Central.

When he became the head coach at Lewis-Clark State, he said his main goal was to "try and create an atmosphere where I could give the student athletes that come through our program the type of experience that I had. I had such a positive experience here at Central Washington and there's a lot that goes into that."

Patience, dedication, respect for traditions, and a willingness to work hard. They are all part of the drive - that need to always improve - that is simply part of Rinta's DNA.

"I've been through these transitions before and there's always been a little bit of an adjustment period," Rinta said.

"What's new to me this time is how comfortable I feel here on campus, in the gym. It really does. It feel like I've come back home."