The $64.5 million Samuelson Hall is open for business.

Vacated since 2006, the old Samuelson Union Building was a patchwork of remodeling and additions that were constructed between 1928 and 1967. 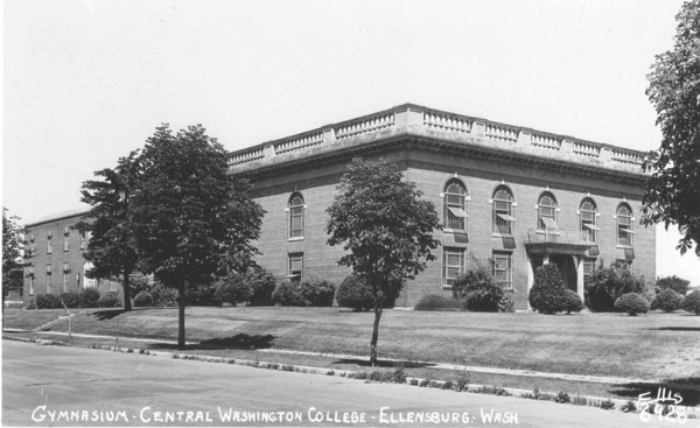 Samuelson Hall circa 1940. Samuelson was named after Emil Samuelson, who was dean of students for 32 years

Vacated since 2006, the old Samuelson Union Building was a patchwork of remodeling and additions that were constructed between 1928 and 1967.

"It was like an archaeological dig, stripping away the various 'strata' of old Samuelson," said Doug Ryder, University Facilities planning officer and Samuelson project director. "It was like seeing a history of construction methods and materials throughout the past 80 years."

In 1926, when CWU's student body numbered in the hundreds, the College Union Building provided a central place for students to gather and socialize. The $42,000 structure housed a gymnasium, and served as the home of student government.

Later the gym was converted to a ballroom, where students danced to swing bands in the '50s, and rocked out to pop bands in the '60s. From 1967 to 2006, it housed student clubs, the Student Union and Recreation Center and later, the college bookstore.

It was shuttered for more than a decade and used for storage. With funding from the 2015 state legislature, demolition of the old Samuelson began in May 2016. The 57,750 square-foot south wing was demolished and replaced, while the 49,250-foot north wing underwent a major re- construction.

The new building was constructed with the highest standards of energy efficiency according to LEED, or Leadership in Energy and Environmental Design, the most widely used green building rating system in the world. Washington state requires public buildings to meet a minimum silver LEED certification; CWU is hoping that Samuelson will achieve LEED gold.

“The building is very energy efficient with the use of LED lights, automatic lighting controls, and heat recovery systems,” Ryder commented. “The interior materials and finishes were selected to be durable and environmentally friendly, such as bamboo flooring, low VOC (volatile organic compounds) paint, and polished concrete floors.

The new structure also contains the office of Multimodal Learning, which is integral to CWU’s digital class offerings and other distance education options, and the campus data center.

Mammoth As with all new buildings, Samuelson received artwork funded through the Art in Public Places (AIPP) program. The program allocates one-half of one-percent of the total project funding for art to be installed on the site of a publicly funded structure.

Sculptor Ilan Averbuch created a massive work that frames the eastern entrance of Samuelson. “Mammoth” is a large-scale installation of a woolly mammoth tusk, one that appears to go under the walkway, and emerges on the other side. The artist was inspired by the discovery of mammoth bones on private land in the Wenas Creek Valley near Selah, Washington. From 2005 to 2010, CWU faculty and students conducted field schools on the site, extracting additional mammoth bones as well as those of a prehistoric bison. A website, cwu.edu/mammoth/, describes the Wenas Creek Mammoth Project.

According to Averbuch, the sculpture “creates a visual metaphor for the scientific advancements made from that discovery . . . It evokes a spiritual and intellectual search into the past to understand who we are and our place in the universe.” The artwork was installed in July.

Averbuch is a sculptor who grew up in Israel, and attended university in England and the United States. His artworks are mainly large-scale outdoor sculptures, made from raw materials such as stone and wood, as well as metals and glass. In his own words, his art “involves the recycling of images and materials, moving from one time span to another."