Ask Wellington: Is it true there’s a cave in Eastern Washington that is shaped like a prehistoric rhinoceros and was first investigated by a CWU professor in the 1930s? 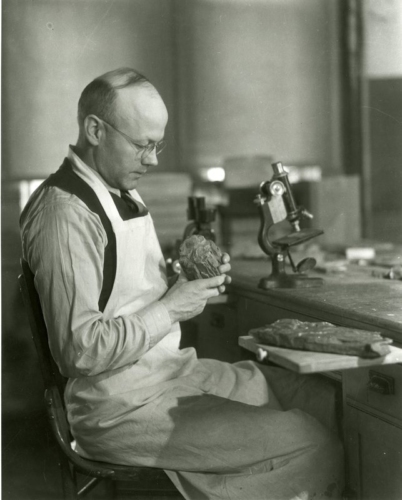 The cave in question is now known as Blue Lake Rhino Cave and it is located in a canyon wall of the Lower Grand Coulee, north of Lakeview. The cave, which overlooks the lake, was discovered in July 1935 by four friends, Mr. and Mrs. George Peabody and Mr. and Mrs. Haakon Friele, who were searching for petrified wood in the basalt cliffs in Jasper Canyon at the east end of Blue Lake.

According to accounts, after the four stumbled upon a small cave, Haakon Friele crawled inside. He found bone fragments scattered about, including part of a jaw with teeth. He removed the bones and gave them to George Peabody, who took them to the University of Washington. UW, however, didn’t have a vertebrate paleontologist so it referred Peabody to George Beck, a prominent geology professor at the Washington State Normal College.

Beck, who taught geology and the sciences at the WSNC from 1925 to 1959, was the co-discoverer, in 1931, of the petrified forests of central Washington and largely responsible for establishing the Ginkgo Petrified Forest State Park near Vantage.

About a month after the cave’s discovery, Beck and an assistant visited the site. After climbing up the hillside (the cave is about 300 feet above the surface of Blue Lake) and crawling through a narrow opening in the rock face just big enough for a person, Beck collected bone samples and studied his surroundings, noticing its unusual shape, which he surmised could be the shape of a “supposed rhinoceros.”

In late 1935, Beck published his first article about the discovery. In it, he described the shape of the cave and noted he forwarded the bone fragments to the California Institute of Technology for further investigation.

A formal report issued in 1951 suggested that the cave’s shape was formed about 15 million years ago by a dead rhinoceros. Apparently, its bloated, upside-down body was floating in a shallow lake when molten rock flowed into the water.

“The water cooled the outside layer of the basalt but it remained liquid within and still somewhat mobile,” wrote Seattle-based natural history writer David B. Williams on the historylink.org website. “Geologists refer to such water-cooled basalt as pillow lava because of its shape. As the basalt continued to flow, it built up layers of pillows that molded around the dead rhino and preserved its form.”

Over time, the rhino carcass slowly disintegrated and most of its bones disappeared. But the shape of the body remained largely intact.

In 1948, researchers from U.C. Berkeley made a cast of the cave’s interior (they filled it with plaster, which was then removed through the opening). Based on the cast and the bones, they proposed the rhino was once a mature Diceratherium, an extinct type of rhino once found in North America, Europe, and Asia between 33.9 and 11.5 million years ago. Interestingly, the cast was used to create a replica of the cave for Seattle Burke Museum, where it is still on display.

So, the answer is yes!